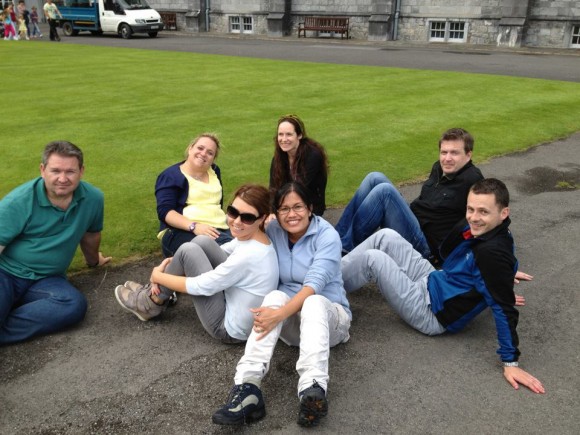 So, another tough week over. Cooking for 200 tri-athletes in monsoon weather was really tough. We were up at 5.30am, and we had 3 hours to come up with our menus and cook them. We looked fairly calm on TV, but we were definitely not. Washing and prepping strawberries, mussels, clams, beetroot, etc., for 200 people was torture. Our ovens kept blowing out with the wind, the rain was pouring in on top of us, and we could not get the pots cooking quick enough.

We were so disappointed to lose the task. Dylan said that the Orange team won by a mile, but there can’t have been much in it. We did get great feedback and the Mayor even said that ours was best by far!! Fair play to Conn for his effort. I’m sort of glad I didn’t win it, as Conn had to go work for 6 hours after the day he already put in.

On to the cook-off where I was faced with losing the apron. Cooking 3 courses in 1.5 hours for 1st Class Emirates passengers. The brief was that it had to be able to be re-created by the cabin crew at 30,000 feet, and that it had to incorporate flavours that would hold at altitude. I cooked Tomato and Mozzarello salad with Basil Pesto dressing for a starter. Tomatoes really hold their flavour at altitude and I knew I could make this quick and it would be full of flavour. That would give me more time with the other dishes. I choose fillet steak for the main course because I could cook that to a rare state, and it could then be re-heated at altitude. I served this with a celeriac mash, and some green vegetables. I was originally going to cook the steak medium-well, but Dylan gave me a strange look and I knew what he meant! Finally, for desert I made a lemon tart with raspberries and vanilla cream. The custard in the tart actually split and Nick did comment on that. I was delighted to get such great feedback from all three judges. I even thought that Emirates might give me a free flight to Sydney. Sadly not to be.

Tough to see Nick and Joe go. Two great guys that I will definitely stay in touch with. Nick was really sick the day of the triathlon, and still managed to put in a great effort and I’m not sure what happened Joe. I actually thought he would sail through that task with his aviation background.

The funniest moment this week for me was Simon’s Creme Caramel. Dylan walked over and gave the ramekin a shake, and the custard spilled out the side. Classic.

Next week will see me cooking in a professional kitchen. Serious pressure, as I’m been closely watched by the head chef and paying customers, not to mention having a camera crew in my face. Hopefully I make it through without having to face another cook-off.